Class discussion is distinctly different from question/answer sessions. Question/answer sessions are best suited to reviewing concrete information – questions for which there are discrete answers. Discussions, on the other hand, may be used when there is no clear answer. “What effect did the McCarthy era have on the publics’ perception of government power? To what extent was Galileo’s condemnation by the church his own doing?” Anytime opinion is involved, discussion is appropriate. 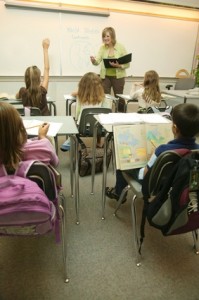 Sometimes the point of a discussion is to instill values. You wouldn’t actually tell the student that is your purpose, but by controlling the content and direction you could achieve that effect. What conditions surrounded the movement led by Martin Luther King?” Hopefully students would come to realize the injustices of that era without feeling as though they had been preached to as they might during a lecture.

Discussions are also useful where complex topics of a factual nature are involved. “How might the earth be different if there was not continental drift?” Student might immediately offer that there wouldn’t be anymore earthquakes or volcanos. If the discussion stalled at that point you could ask what landforms would be different or nonexistent without these forces. “How might life be different without the climatic changes caused by drift?”

You should only discuss topics for which the students have some background information. Otherwise, the activity becomes a waste of time as they offer opinions grounded in ignorance. The one possible exception to this is where you use a discussion to generate interest in a new unit about to be introduced. Here you might ask the students to relate their experiences or knowledge to the new topic.

Clearly your job is only that of a moderator. It its probably fair to say that the less involved you are better. Certainly you will introduce the topic and lay the ground rules. You might also serve as a source of information. Naturally you will call on individuals so that each student will have an uninterrupted opportunity to express her opinion. Or you could arrange it so that the student speaking calls on the next one. Your response to their comments should be non-judgmental as much as possible except where it might be appropriate to rechannel the conversation. If some students do not seem to be involving themselves, you might ask, “Bruce, what do you think about what Tracy said?” As well as bringing in the nonparticipants, this tends to focus their attention on each other rather than on you. Discussions where there is some degree of controversy will generate a high level of interest and tend to encourage exchanges between students.

If students are to discuss a topic in small groups, you’ll need to provide some structure since you won’t be there to moderate. Just as was mentioned in the section on group activities, some members could be given specific responsibilities. On should be the leader and act in your place as the moderator. Consider the personalities of the kids when making that selection. Another ought to be the secretary. Some written record ought to be kept of the discussion or a summary of the outcome. Without the requirement of written work being turned in, the discussion will quickly dissolve into conversations about the weekend or whatever. If the topic is controversial, it makes more sense to ask them to list the different opinions arrived at rather than forcing them to a consensus. Warn them frequently of the impending time limit if you hope to collect their papers by the end of class.

Permanent link to this article: https://bethebestteacher.com/teaching-tactics/class-discussion