Unlike norm-referenced grading, criterion-referenced grading says to the students that all the learning objectives are important and necessary. We need to prepare our students for academic and work environments where standards of performance and achievement are already set. To be sure, criterion-referenced standards will sometimes bring the criticism that it’s too hard. There is nothing wrong, though, with asking students to rise to an occasional challenge. As noted before, norm-referenced grading will allow them to slip further and further into mediocrity, all the while being rewarded with good grades.

Still, there are problems with an absolute grading scale. Sometimes we do inadvertently make a test too hard. Of course, if the grades on one test are absurdly low, and in retrospect the test was unfair, you can simply throw it out. Usually, though, it’s best to keep the grades but give another, much easier, quiz or assignment which will balance out the hard one.

As recommended earlier, you should give frequent quizzes to assess your students’ performance. That way you will have a fairly good idea of how challenging or easy to make each upcoming assignment. In other words, you can control the eventual distribution of grades by adjusting the difficulty of your assignments as the course moves along.

If this sounds a little like a backdoor approach to norm-referenced grading, it is. After all, if you faithfully followed the rules of criterion-referenced grading, you could conceivably end a course with all the students getting A’s or all getting F’s. While the first case might seem better, unless the class is a homogeneous high achiever group, it indicates your course was woefully lacking in content to the extent that even your poorest students weren’t challenged. The difference between norm referencing and criterion referencing is that in the first case, we adjust the grades to match their performance; in the second we adjust our expectations to match their ability.

Using an absolute grading scale within a criterion-referenced system sends the right message to the students. It affirms the importance of the curriculum. It also allows them to control their grade, since they are always shooting for a known percentage. And, it is much easier for you to determine individual assignment grades as well as explain your grading procedure to parents or administrators. Also, you retain control of expectations so that you can use grades as an incentive.

It is a good idea to have your students keep a record of their individual grades. This serves many purposes. It provides a ready reference for parents to keep track of their child’s grades. If you are using an absolute grading system, the kids can keep a running tally of their course grade and see the effects of each test or assignment. If you make a mistake in you own grade book, you can check with the student’s grade sheet. Finally, students getting low grades won’t be able to complain at the end of the course that they didn’t know what they were getting.

The Grade Record Sheet shown below can be used with tests and assignments given point scores. 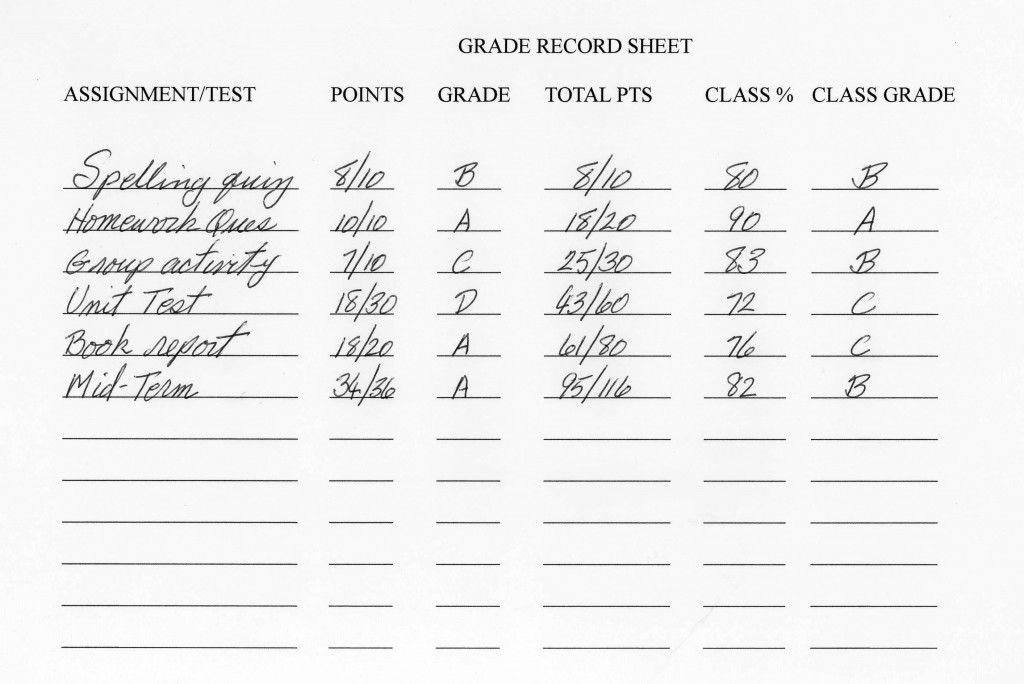 In the event that your course awards letter grades on assignments rather that points, you, or the student, will have to convert these letter grades to points so that the student can do the necessary arithmetic to determine the course grade.

Permanent link to this article: https://bethebestteacher.com/grading-considerations/grading-recommendations